A Chat with TriForce

The brilliant ‘Sorry, I Didn’t Know’ is a new panel show on ITV about Black History. I sat down (/obviously Zoomed) with the show’s Co-Creators, Minnie and Fraser Ayres, who, alongside Jimmy Akingbola, founded TriForce Creative Network – the company behind the programme. Last year, I got the chance to work with TriForce and perform at one of their events, ‘Monologue Slam’ (I wrote a monologue about an aeroplane safety briefing that goes very wrong…) and had such a brilliant experience.

I was excited to catch up with Minnie and Fraser to find out more about the ITV show, as well as about TriForce’s wonderful work in general.

(An additional note about this interview: a total of 5 cats were involved).

Can you tell me a bit more about how TriForce started?

Myself and Jimmy Akingbola were two Actors back in 2003 and, you know, back then there were considerable issues around inclusion and access. And for us, it really is about inclusivity, and always has been. I’m from an estate in Leicester, and the lengths that my Mum and I went, just to kind of get a foot in the door! And so (Jimmy and I) looked around our industry at how it was just not very inclusive, not very supportive, so we set up the TriForce Creative Network. We started with club nights and we got Casting Directors and Producers drunk, and we got Actors drunk, and whether they had Agents or not, they got auditions. One of our big success stories back in that night was that Jeremy Zimmerman cast half of ‘The Scorpion King’ from one of our club nights. He was like – ‘You on Monday! You on Tuesday!’. So it was always about breaking down those barriers.

And because we are creatives ourselves, the solutions we come up with are from that angle. We’re not kind of going ‘We’re wealthy people who want to serve Actors, but don’t actually know what the Actor’s struggle is’ or ‘We’ve got all these great schemes and initiatives, but we don’t actually understand what the obstacles are for working class people’. We’re from those worlds.

MINNIE: ‘The People Next Door’ is where Fraser and Jimmy got to be best mates. About five years later, I did an acting job with Jimmy – we were in ‘Othello’ together with Frantic Assembly. I was playing Bianca and he was playing Othello and that’s when I met Fraser as well (obviously – because you don’t meet Jimmy without meeting Fraser!)

FRASER: Well, he was my first wife!

As a married couple who work together, do you have to carve out sections of the day where you don’t talk about work?

FRASER: I was doing a job with The Imaginarium (Productions) for ‘Planet of the Apes’ and I told the Director about TriForce and Minnie and how we run it, and the Director was like ‘Oh my God, how can you work with your wife?!’ and I said to him that I wouldn’t want to marry someone that I couldn’t work with! We can talk about the frustrations, and we can build the plans and do all of those things, so it’s actually quite a good part of our relationship.

MINNIE: We have the daytime working where we’re in separate rooms and we get on with what we need to get on with, and we shout through the walls saying things like ‘have you done this!’, and then we’re quite good at shutting that down.

FRASER: It’s another baby to be honest. It’s strange, but it is. We built this together. I know Jimmy and I started it, but in terms of the day to day and the building and the development of it, it’s like another baby and we grow it together.

And now, to DandI. Can you tell me more about it?

FRASER: Two years ago, we set up DandI, which is like the crew side of things. And every week, people would phone us and say ‘Do you have X this, and do you have Y that?’ and we would go ‘Yes!’ because the network is now 60,000 people across the UK. It’s crazy. But we don’t charge the Talent and we’re never going to, so you need to support the work. And then you get into that sticky conversation; we spent many years literally begging the industry for support, so we wouldn’t charge the Talent. So, we work on a subscription model, signing up the production companies and we’re now working with over 40.

The brilliant ‘Sorry, I Didn’t Know’, a TriForce production, is now airing on ITV. What was the journey like from the pilot episode (in 2016) to 2020?

MINNIE: We’d done the pilot and we’d talked to most of the channels in this country – there was a feeling that it was too niche, that it wouldn’t draw a broad audience and that we would run out of material, as if to suggest we would run out of Black History. We maintained our relationship with ITV and we were already in talks and had built a relationship with the Entertainment Commissioner there. And the reason they hadn’t commissioned the show at this point was that they were aware the channel had turned it down in the past. But then, obviously, the Black Lives Matter movement happened.

FRASER: We were told by literally everybody that ‘It’s not for our audience’. They’re making assumptions about their audience, and it’s a very loaded comment. And it’s been different steps. So, our whole thing is diverse content for mainstream audiences. And that’s why we chose a panel show for the first one and it holds up against ‘QI’ and ‘8 Out of 10 Cats’. It’s just a show. It doesn’t necessarily have to be filled with trauma; it can be entertaining. Something like ‘Black Panther’ went a long way to show that.

The pilot was originally on ITV2 and then (ITV) said; OK, we’re going to give you a prime-time slot. And rather than going OK guys; off you go and inevitably fail, they’ve supported us with PR, they’ve supported us with Legal. They went above and beyond to make sure that a very small company like us, could compete on the same level as the big boys and that’s the real, tangible stuff.

The show airs during Black History Month. How can we make sure that important work like this continues?

FRASER: The black experience doesn’t stop when the clock chimes on the 1st November! And same with Me Too. But this time is actually different. And it’s not because, necessarily, anything’s been said that’s different, but we’re still talking about it months after the event. And, again, going back to DandI; we placed 200 people in 18 months. We’ve now placed 600 people in 2 years. Because of that last 6 months, we’ve managed to place like 300 people. Because we’ve talked about it longer, more change is actually able to happen. We’ve got people in Development roles, we’ve got Producers in; people who can actually change the industry moving forward and they’re not going anywhere now.

MINNIE: A particular area of concern are Heads of Department; those senior roles in crew, because there’s not much diversity and some departments are worse than others. But there’s definitely an appetite among some production companies to have at least 1 or 2 people where it’s their first HOD role, and making sure they’ve got the support around them.

Did you have any favourite moments during the filming of ‘Sorry, I Didn’t Know’? And what were the biggest challenges?

MINNIE: There’s a story that Sean Morris, The Chaser, tells about his ‘inspiration wall’ and that’s kind of one of my favourite moments of the show. It’s not a hilarious moment but it’s really heart-warming and it really shows what the programme’s about. You’ll see it on Tuesday, when you watch the episode.

With regards to the challenges, we managed to make it safe and nobody got sick. We know it’s so much nicer for comedians if there’s a live audience, and how much difference that makes to the vibe of the show and everything, and we really wanted to do that. So, we did a lot of work on making that safe so they’re all bubbled up on cabaret-style tables. But I was really proud we managed to have an audience. They all had matching masks.

FRASER: We’ll send you one!

How do you juggle all these different strands of the company?

FRASER: (Laughing) We don’t like sleep! It’s quite funny; they’re all one thing. They’re different expressions of the same thing.

MINNIE: We have fantastic freelancers, who we work with regularly. For example, WriterSlam has a team of readers; you don’t see them but they’re there, doing the work. And we tend to work with people for a long period of time.

(ME: As someone who has taken part in a TriForce event, it does feel like a big family when you’re there.)

FRASER: We call it the TriForce family.

What else are you both watching, at the moment?

We’re now doing a ‘Schitt’s Creek’ mega marathon. The other drama we’re watching is ‘Lovecraft Country’, which is amazing.

‘Sorry, I Didn’t Know’’s final episode airs on ITV at 10.45pm tomorrow. Catch up with previous episodes on ITV Player now. More about TriForce’s work can be found here! 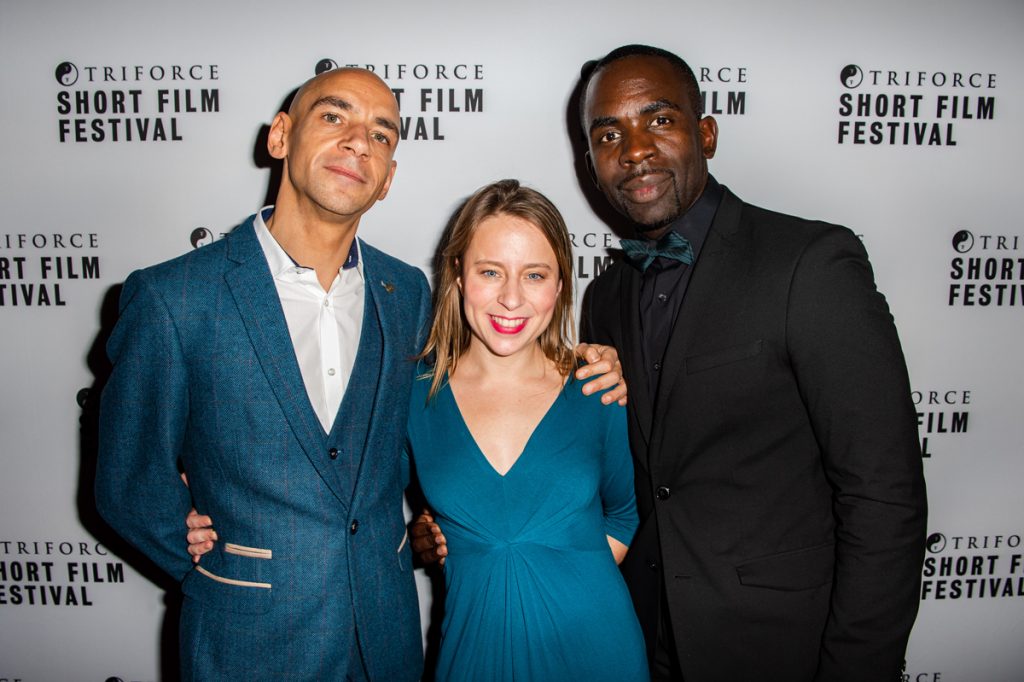