Welcome to The Girl Club. Or rather, Girlfriends Season at the BFI. Same thing. On Saturday I went to a talk called ‘Squad Goals: TV Girlfriends on Screen’. And I loved it so much I thought I’d fill you in 👭

I rocked up on my own; just the way I like it. Well, when it comes to cinema trips and things like that (although I do love a friend with me, don’t get me wrong). But THIS way you can switch off and completely immerse yourself in it.  So there I was; packed lunch in tow, notebook in hand, ready to nestle in.

The main point that I got from the day was how much television can affect people. And that’s why TV and film is so important. If you can take the slightest bit of influence or comfort in screen time, then it’s worth every bit. Like Sex and the City – people just love to put it down – to criticise it, to say they find Carrie annoying, to call it a ‘guilty pleasure’. But why should we belittle it? Why not be proud and shout from rooftops if we love it? If it’s provided some happiness? Some small joy? 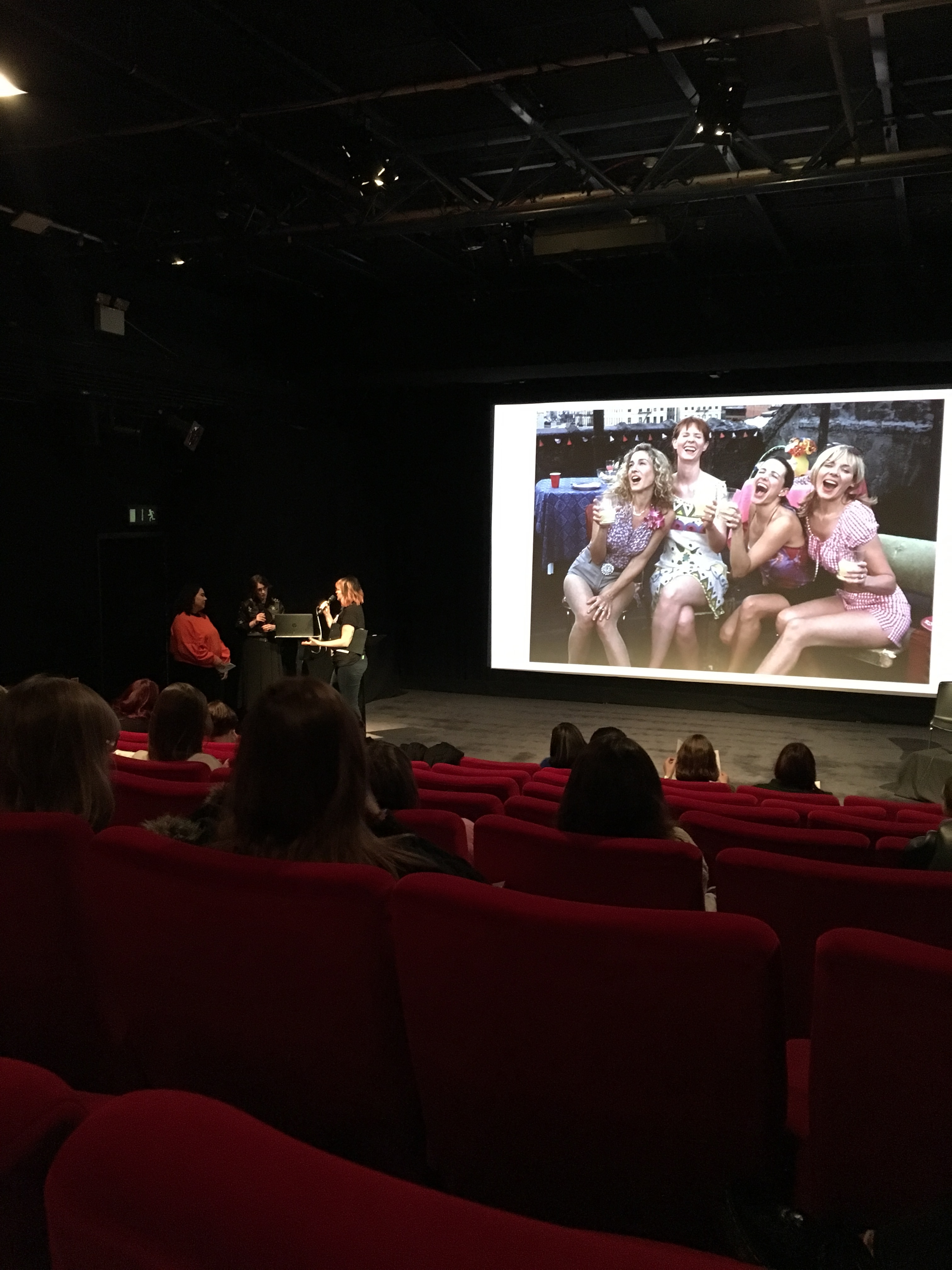 Let’s also not forget the valuable lessons. Look at Charlotte when she told the other women that they could be ‘each other’s soulmates’ after Carrie finds herself heartbroken and declares that she feels lonely. And remember it’s Charlotte speaking. Charlotte! The one friend in the group who openly admits one of her main aims in life is to get married and have babies.

So look at the power of these women when they have each other’s backs. When Carrie jumps to the rescue alongside Miranda after she finds herself walking behind her mother’s coffin. When Charlotte interrupts Carrie having a shower to drag her out for dinner on her birthday. When Miranda sits and demands Samantha tells the group about her illness on her wedding day. As Big says: ‘You’re the loves of her life and a guy is just lucky to come in fourth’. Well how about that. How about using it to shine a light on your own life and realise that you DO have people around you. Even if you feel lonely, just remember; you’re never alone.

Yes – there’s glitz, there’s glamour. But it’s not all like that. Sure, we’ll never quite understand how Carrie affords her flat or those ridiculously expensive clothes. Or how they have the time to go for lunch with each other every single day, but its heart is still there – bright and beaming through the middle. Alongside the glamour, there’s heartache. Behind one ring, there’s a break up post-it and with each absent family member, there’s a friend to pick up the pieces.

I liked that it was unapologising, awkward and graphic. I liked that the friendships weren’t always perfect. And then, by the end, you had to question whether they were good friends at all. *SPOILER ALERT* Shoshanna rejected the group and made new friends, Jessa had stolen Hannah’s ex boyfriend and Marnie was, well, Marnie. But I thought it was wonderful. A reminder that life isn’t perfect, that relationships need to be fought for and that no one’s bodies look like how they are in magazines. (But please, besties, if you’re reading this – no one reject the group, OK?!)

The panel also talked about The L Word – a TV series looking at the loves and lives of a group of lesbians, Broad City – which I have never seen in my life but which looks pretty hilarious, and Insecure – a Sky comedy which I’ve watched a few episodes of and want to finish. I don’t know much about their content but the sheer fact that speakers get up to discuss these shows so passionately, is another reminder of how much we value female friendships on screen.

…I couldn’t help but wonder. Everyone has their own form of entertainment, people like escapism, you can learn from TV shows, you can be inspired by them, you can be comforted by them and your friends are one of the most important things in your life. Look after them, cherish them, make time for them. They’re the extra family members you chose for yourself.

Oh and i’d say I’m a Charlotte mixed in with Carrie.

The Love is Not Over